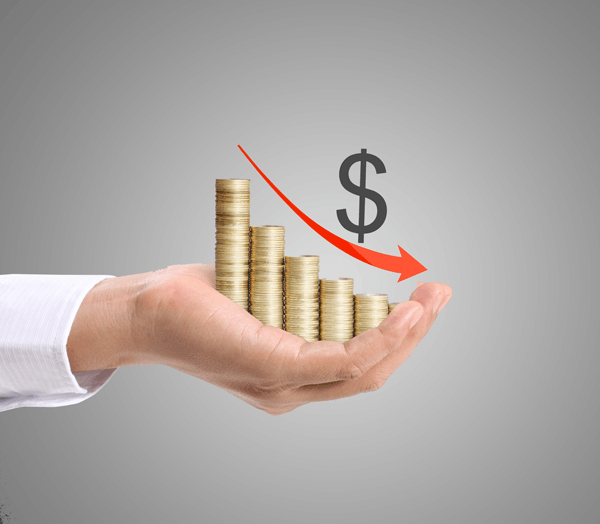 The highlight of the week ending May 31, 2014, was the release of downbeat data on U.S. gross domestic product, revealing that the economy contracted more than expected in the first quarter of the year, leading to the dollar’s weakening against most major currencies.

The U.S. Bureau of Economic Analysis revealed on Thursday, May 29, that the gross domestic product contracted 1.0% in Q1. The preliminary estimate indicated a growth of 0.1%. The figure was worse than the most unenthusiastic scenario, as the median estimate called for a 0.5% contraction. This was the first decline in GDP since the first quarter of 2011 and a sign that the economy is still very weak. The dollar weakened on the news, reminding traders that even if the Fed cuts down stimulus, rate hikes won’t come for some time afterwards.

Key areas of decline were inventories, exports and non-residential fixed investment. Inventories expanded half the rate compared to the last quarter of 2013, deducting 1.6 percentage points off GDP, while companies trimmed down investment and decreased expenditure on structures by 7.5%, the biggest reduction in 12 months. Exports fell at a rate of 6% and imports surged, with goods and services trade trimming 0.95% of GDP, which is the highest since the second quarter of 2010.

Still, the report did contain some positive data. Consumer spending, which accounts for almost two-thirds of the U.S. economy, rose by 3.1% up from the previous estimate of 3.0%. The gain contributed 2.1 percentage points to GDP. A number of economists argued that the unusually harsh weather conditions depressed the economy in the first quarter of the year and that it will gain momentum on the second quarter, with some even boosting their growth forecasts. The median estimate indicates that the economy will expand at 3.5% in Q2.

Fewer dismissals may be an indication that companies are poised towards improving demand, thus stimulating employment growth. Gains in the labour market are needed in order to support consumer spending, which drives 70% of the U.S. economy. The steady progress means that the Fed will probably continue winding down stimulus.

One day later, on Friday 30, official data released by the U.S. Commerce Department showed that personal spending dropped by 0.1% in April, marking the first decline in a year, after a revised 1% rise in the previous month. Analysts expected a rise of 0.2%. The report on core personal consumption expenditures showed an increase of 0.2% in April, after a rise of the same level in March. Personal income rose by 0.3% in line with forecasts. Adjusting consumer spending for inflation, which produces the figures used to gauge GDP purchases, declined 0.3% in April, which is the highest since September 2009. The figures strongly imply that the largest part of the U.S. economy will take time to pick up the pace.

As a consequence, the greenback traded lower against most rivals on news that the U.S. GDP contracted more than anticipated in Q1, although losses were limited as harsh weather conditions made the situation look worse than it really was. The U.S. dollar index, which measures the performance of the greenback against six other major currencies, was down 0.11% at 80.44 at the end of the week.

The single currency edged up against the greenback on Friday, May 30, as the downbeat data weighed on the dollar. Official reports released on the same day revealed that the annual inflation rate in Spain and Italy slowed in May, underlining expectations that the ECB will take measures to tackle low consumer price growth. Other data published earlier in the week, showed that German retail sales declined 0.9% last month, against estimations for a 0.4% increase, after a revised 0.1% uptick in April. EUR/USD surged to 1.3633 on Friday from Thursday’s three-month low, trimming the week’s losses to 0.13%.

The sterling was also higher against the dollar on Friday 30, with GBP/USD reaching 1.6762, the pair’s highest since Wednesday, May 28, and consolidating at 1.6753, marking a 0.22% gain. However, concerns regarding the U.K. housing sector limited sterling’s gains. Data released by the British Bankers’ Association earlier in the week, showed that banks approved the lowest number of mortgages in April, in a course of eight months.

The Japanese yen held stronger against the dollar on Friday, 30, with USD/JPY trading down 0.05% at 101.74, after the release of official data painting a mixed picture of the Japanese economy. The reports showed that the core CPI increased 3.2% in April, against estimations for a 2.9% gain, due to the sales tax hike from 5% to 8%. Unemployment rate in the same month held steady at 3.6%, in line with forecasts, while household spending declined 4.6%, exceeding expectations for a 3.2% fall. April’s industrial output also fell by 2.5%, more than the expected 2% fall.

The Swiss franc was also higher against the dollar on the same day, with USD/CHF falling 0.09% to 0.8972. Meanwhile, Switzerland’s KOF economic barometer dropped 99.80 in May from a revised 101.80 reading in April. Economists anticipated the index to fall at 101.70.

The U.S. dollar was steady to lower versus its Australian, New Zealand and Canadian counterparts on May, 30. AUD/USD gained 0.08% to 0.9315, NZD/USD rose 0.06% to 0.8491 and USD/CAD fall 0.06% to 1.0830. In Australia, the RBA’s private sector credit data showed an increase of 0.5% in April, exceeding expectations for a 0.4% rise. In New Zealand, official data reported that building consents increased by 1.5% in April, missing expectations for a 3.5% fall, after a revised 9.2% increase in March. Elsewhere, data on the Canadian GDP reported an expansion of 0.1% in March, in line with expectations, following a 0.2% rise in February.

20th of August it is the day of an official state holiday of Hungary called St. Stephen's Day. It is also known as Foundation Day and Constitution Day. By some of the Hungarians  St. Stephen's...

The mother that we all admire, the mother who faced so many trials while on Earth now sits in heaven, looking down on us and protecting us. Today we celebrate this mother, the Virgin Mary, and remember...

May you getaway today, any way you can, to escape the heat and the unprecedented times we are living in. Keep celebrating the way we always have and keep safe.