Teletrade’s yachting team will participate in the European yachting competitions; summer of 2014, at the Black Sea. 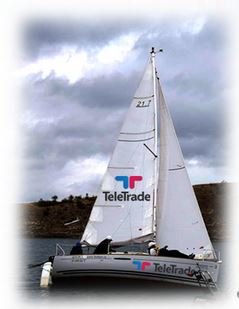 Being a leader in the field of financial markets and also present in E.U. as a top broker, TeleTrade is getting involved to support the performance of sports in top competitions. After announcing that actively supports children practicing high performance judo in both national and international competitions, Teletrade has just joined yachting! The season of 2014 is at the Back Sea and for the entire summer the TeleTrade Sail2Victory team will be also wearing the company’s logo.

"Working with Teletrade first means an official and recognized sailing team, our team; because we have become Teletrade Sail2Victory team and the boat will be named TeleTrade for all competitions. (Samsung Romania Cup, Campianatul National Yachting Regatta Sail Kit). The effect of the partnership also empowered our lever of performance and results. We have adapted to a weekly training program with 2 sessions (one is on the sea: starts, fine tuning, coordinating; and the other is onshore: strategy, simulations, tactics and tuning equipment). As another advantage, this collaboration brought us additional regatta electronic instruments. The old existing equipment, has changed entirely, achieving one uniform and complete set of equipment imported from England." said Andrei Ionescu team member Teletrade Sail2Victory.

" The passion and ambition to work for what we want is the real major opportunity in Romania’s fight for a flourishing economy and a high standard of living . I am happy to be part of a collaboration where Teletrade Romania engages performance and holds values. The well-known contribution of the financial group Teletrade, in financial education and opportunities to earn money by trading the international financial markets, is a real platform-advantage for a richer and smarter generation" notes Goldman Laszlo, Chief Image Administrator (CIA ) & Creative Partner Teletrade Romania.

Constanta, Eforie and Mangalia will surely attract many admirers of sailboating, a noble sport that train all practitioners’ instincts, offering them satisfaction and experiences. With an international presence in 30 countries, Teletrade is also supporting sport, promoting the concept of fair play and joining an activity worthy of a succesfull business lifestyle.

"Though it is not obvious at first glance, the connection between yachting and trading, can be noticed in the basic needs required for this sport: financial resources, a flexible schedule and mobility. During the last 50 years there was a direct proportionality constant relationship between the financial markets and the yacht exchange market. Simultaneously with the appearance of the possibility to trade online, many people passionate about yachting and races became more active in the sport and more able to be permanently connected to financial markets (even on sea) while having more financial resources to support his passion." said the crew Teletrade Sail2Victory.

Samsung Romania Cup 2014 is organized by the Black Sea Sailing - Boat Owners Association, Yacht Club Regal Roman - Romanian oldest yachting club and Life Harbour Marina Resort; And is the most far-reaching sailing competition in 2014. All the races of the competition will be held under the rules of competition ORC and under the aegis of the Romanian Federation of Yachting.

Founded in 1994 , Teletrade Group is a global company that offers clients a full range of services and opportunities, market knowledge and educational support. With over 200 branches in 30 countries, Teletrade is the largest company of it’s kind in Asia and Europe, offering a full range of services in accordance with global quality standards. In Cyprus, Teletrade Europe is licensed and regulated by CySEC (Cyprus Securities and Exchange Commission) and completed with MiFID (Markets in Financial Instruments Directive). Teletrade has received numerous international awards that attest to the quality of services provided.