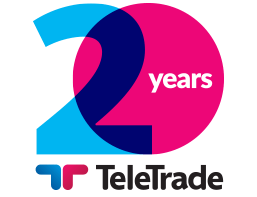 TeleTrade, a global leader in providing access to trade in the financial markets, celebrates its 20th anniversary. With an experience expanding over two decades, the company has managed to reach the lives of thousands of people in 30 countries around the world. In the occasion of the 20 years celebration, the company takes the opportunity to give away 20 iPads, through an exciting draw.

In November 2014, TeleTrade celebrates its 20th anniversary. Since 1994, the Group has helped countless investors across 30 countries to gain their financial freedom and face the future with optimism. The company’s philosophy, expressed in the words “money, freedom, future”, sets the stage to move forward, to evolve and to constantly develop new investment opportunities. In commenting about TeleTrade’s successful operations around the globe for the past two decades, the company’s management stated that “It is our clients’ trust and support that gives us the wings to constantly reach new heights, move boundaries and enter new global markets”.

Celebrating its 20th anniversary, TeleTrade gives away 20 iPads for each year it has been on the markets. Any trader who deposits $1,000 USD in a TeleTrade trading account between October 3rd 2014 and January 1st 2015 will be automatically entered into a draw to win. The 20 lucky winners will be announced at the beginning of the new year.

TeleTrade wants to express its gratitude to all those who have supported the company to reach this incredible milestone and to make a commitment to be by their side for the next 20 years. Finally, TeleTrade team wishes all draw participants the best of luck and great success in their future endeavours.

Founded in 1994, TeleTrade is a truly global brand. With over 200 offices in 30 countries, the company is a leader in online trading of financial instruments, with numerous industry and business awards. TeleTrade-DJ International Consulting Ltd is licensed and regulated by CySEC, and operates in compliance with MiFID. 1st place: 10,000 USD in your trading account.